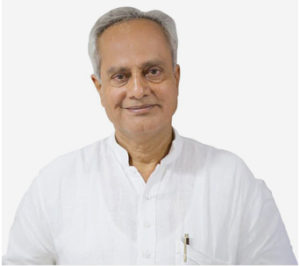 The ‘Jeevan Jyot’ trust founded by Mr. Savla now runs more than 60 humanitarian projects. Mr. Savla, now 57 years old, works with the same vigour when he started at the age of 20. Mr. Harakhchand Savla is a person with calmness and serenity. He is the managing trustee of the trust which has expanded itself to 12 different centres throughout the country including Mumbai, Jalgoan, Sangli and Calcutta. He says that his wife has been a pillar of strength and support at all times in all his activities: his vision of social work, balance home and business. His sensitivity towards needy is seen right from childhood. He used to save the bus travel expense to school to pay school fees for one of his friend who couldn’t afford the fees. He believes in the line that, what the society has done for us that favour I need to return back to the society. In his youth he formed a association in his vicinity. His far sightedness and his conception of dream have been laid by blood donation camps, free food distribution, medical aid and fulfilled the need of all needy patients. He also provided last cremation rights to unclaimed bodies.

He managed a library in Lower Parel and during that course he had a keen interest in reading and thus developed deep knowledge in literature and philosophy. With this experience few people came to take his guidance and that was his first turn to see the ground reality at Tata Hospital. Being a successful business man did not give him enough satisfaction. He would stare at the crowd in front, fear plainly written upon the faces of the patients standing at death’s door; their relatives with equally grim faces running around. These sights disturbed him greatly. It haunted his thoughts. And then he found his light in the dark tunnel. He rented out his own hotel that was doing good business and raised some money. From these funds he started a charitable activity right opposite Tata Cancer Hospital, on the pavement next to Kondaji Building. He started this as a small base by giving Cancer patients and poor and needy people medicines, stay, food and guidance. He himself had no idea that the activity would continue to flourish even after the passage of 37 years. The activity consisted of providing free meals for cancer patients and their relatives. He has started the activity of collecting old newspapers, clothes etc from door to door and has collected 40 lakhs from this a set an example to the society. Beginning with fifty, the number of beneficiaries soon rose to hundred, two hundred, three hundred. As the numbers of patients increased, so did the number of helping hands. As years rolled by, the activity continued; undeterred by the change of seasons, come winter, summer or even the dreaded monsoon of Mumbai. The number of beneficiaries soon reached 700. Mr Harakhchand Savla, for that was the name of the pioneer, did not stop here. He started supplying free medicines for the needy. In fact, he started a medicine bank, enlisting voluntary services of three doctors and three pharmacists. A toy banks was opened for kids suffering from cancer. For last 37 years, millions of cancer patients and their relatives have found ‘God’, in the form of Harakhchand Savla.

He has his contribution to the society and nation for humanity.

Please let us know if you have a question, want to leave a comment, or would like further information about us.

Please let us know if you have a question, want to leave a comment, or would like further information about us.